It's all in the Numbers

Hello Saturday.  The temps outside are a cool 36 (F), and there is snow in the forecast for tomorrow.  The prediction is for about 2.5 inches.  That will be fine.  An easy shovel.  The long range forecast for for temps to stay around the same.  That's fine with me.

My TV is fixed.  Not in a mechanical way, there was nothing wrong with the hardware.  Thinking there might have been an update that I didn't get, I spent some time on the internet yesterday morning researching why it was only connecting for Netflix.  On the Sony website, I clicked on Chat and shortly there after was talking to Steve.  He asked if he could remotely access my 7 year old TV and I told him he could.  About 10 minutes later the problem was corrected.  I watched what he did, so now, should this ever happen again, I know how to fix it.

I ordered a dog bed for Biggie since he no longer seems to like sleeping on the big bed.  It arrives today.  We shall see if it was worth it.

I saw this and had to laugh.  If you're praying to your deity for assistance in getting Kevin McCarthy elected as Speaker of the House, and it still takes 6 more votes, you're getting an obvious message from your deity, and it's not one that you probably want to hear. 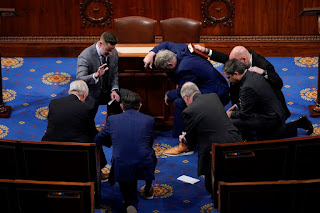 And what about Kev McCarthy finally nabbing victory on the 15th vote?  I watched a short video, sound off.  I'm giving him 7, possibly 8 months.  All it takes is 1 member of the House to object to his performance.  At one point is was 5 members, then he made a concession and dropped it to 4, but in the end, his desperation forced him to accept 1.  Nothing will be accomplished, except for a number investigations into Hunter Biden's laptop.
George Santos was sworn in.  I'm giving him 2 to 3 months before he's arrested, or extradited.  Republicans are already discussing who they want to fill his seat once it's vacated.  I'm betting that since there's a Democratic governor, and the district Santos represents has for quite some time been Democratic, he will be replaced his Democratic challenger, the one who barely lost the election.
Finally, I have to touch on Matty Schlapp and his wandering hands, no doubt he just wanted to reach out for a lost member... of his flock.  I actually listened to the sound bite of the complaint.  Matty had been drinking.  So, is this devout Christian going to say he was drunk?  His victim is trying to sound traumatized, even though he chose to not say "no."  If he was truly unhappy about the unwanted advances, he should have just slapped Schlapp, instead he chose to make a public complaint.  I suspect this story might have legs.