Good morning, world!  What ever I had yesterday with the headachy, muscle achy, gee, I think it's time for another nap problems are gone.  Perhaps I had the 18 hour flue.  All I did was bake 2 loaves of bread, work on the book, and take naps.  Things were accomplished, but not as many as I wanted.
One the best films I saw last year was Nope.  Soooo many people either didn't understand, or disliked it because it just didn't rub their horror, science fiction, thriller, drama, comedy buttons the right way.  This scene is just one of the many that impressed me so much.  On the big screen, this was amazing.
They finally began to clean out the house next door.  Lots of junk, garbage, and refuse for the landfill.  I think it might have been cheaper to just rent a giant dumpster, since they since labor form moving out of the house, and then loading it on a truck, is probably going to be pricey.  The stack on the far left, I suspect, is what they think they can sell at a flea market, the rest?  Garbage. 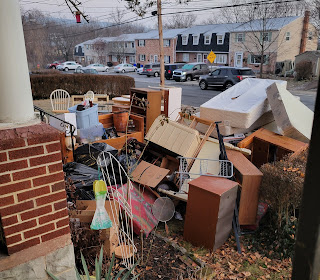 We all know that Republican voters are not the smartest and, unfortunately that can also be said for some Democratic voters as wells as Independent voters.  This is because most of the education they receive in school is, well Garbage.  There are people out there who don't know that a Bill is really nothing more than whole lotta words and has no value until it becomes a law.  So, that bill the Republican house passed yesterday is useless, unless the Senate approves it.  Not likely.  Yet the Republicans will always resort to their lies of 'getting things done.'
And that little subcommittee Jim Jordan has put together in a desperate hope to find out what dirt the DOJ has on him and his fellow insurrectionists is going to fail.  This will be obvious once the indictments begin to fall, and I'm hoping they begin to fall shortly.  The mid-terms are over.  The time is now to start throwing out the Republican garbage.
Posted by Dave R at 8:38 AM