Oops, I did it again... slept in, that is.  To be honest, it wasn't as though I went to bed last night at 11 PM and slept the entire night away.  For some reason, I've been waking up around 0200.  Most nights I just wait to fall back to sleep.  Last night I put that time to good use.  I made notes on The Body Under Ice.  I'm finishing off the final chapter and, as always, there are points that have to be explained.  Sometimes those changes are no more than adding a simple sentence earlier in the book.  You know, simple things say so much.

And the screw in the title refers to one of he several securing the control panel of my treadmill.  Repairs are complete!  It's be lubricated and the belt has been centered.  The only thing missing is that one little screw.  It fell into the space below the motor and the only way to get it out is by turning the treadmill onto its side.  Well, that ain't gonna happen.  There are 4 other screws holding the control panel in place, so I'm not too worried about it coming lose.

Here's a bit of a funny.  Yesterday, Madonna announced her Celebration Tour.  While she does have her loyal fans her are overjoyed, most of what I've been seeing on Social Media has not been kind.  There are comments about the standard 2 hour delay before her show starts, could this be how she proves to herself that her fans will wait an eternity to see her show, to comments about carbon dating to ensure it's the true Madonna.  One fan, desperate to prove his loyalty Tweeted out "sure, she looks weird, but it's still Madonna."   Honestly, I think she's looking pretty good for an aging Asian woman.😎😎😎 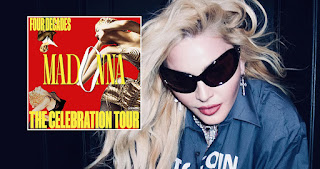 Of course, Americans concerned about Democracy are unhappy with the House committee assignments.  People are wondering how George Santos could be put on 2 committees.  Well, you have to remember that Republicans don't give a shit about America.  They are selfish and self-centered.  They also know many of their campaign contributions come from corporations who also don't give a shit about America.    Republicans don't understand that for every action, there is a reaction.  They truly believe that they can act and everyone will accept what they do.  They barely scrape by with a majority in the House during the midterms and they are treating it as though they have a mandate.  They will never learn.  They do not consider what the consequences will be, only that they need to say "shut up, we're in charge."  They are going to fail horribly.  That's a good thing.