Saturday.  I work.  A full 8 hour shift.  Excitement percolates at the thought of sitting at the flooring desk and talking to people about carpet, should they go with Triexta, or just a simply poly (polyester).  Well, that's bunk.

Being semi-retired means I can now sleep in a little if I want.  Of course, then I end up staying up later, which can, should I let it, begin they cycle of late nights and later mornings.  My neighbor did that, stayed up until 3 in the morning and then sleeping in until noon.  I find that I think differently late at night then in the morning.  I allow ideas to slide, rather than pinpointing details I find fascinating.  Like most people aging gracefully, I am concerned about my mind sliding, so this morning when the alarm went off at 0545, I rousted myself.  Are things clearer, sharper at this early hour?  Possibly.  I do know that I don't let things slide.  I didn't start playing a video game to help pass the time until I was tired enough to go to bed.

Well, this happened yesterday morning.  This is the 2nd dumpster brought in for the clean-up of the house next door.  Yesterday was also the day the workmen started cleaning out the attic.  One of them told me it was creepy.  I can tell you it's big.  The peak is 18 feet off the floor.  If there weren't so many beams, it might make for a nice master suite. 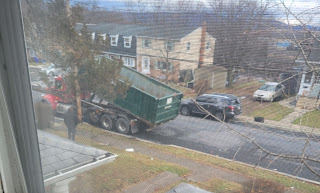 During an interview, Lou Dobbs claimed that there is a 'rank cover-up' in the Supreme Court over the Roe v Wade leak.  He's right, however his statement implies he believes the leaker to have been a Liberal.  I don't believe he understands how wrong he is.  Had that been true, this ultra Right-Wing court would have leaked that information.  Conservatives only protect their own.  I'm betting no one can even remember the last time a conservative stood up for a Centrist.  I know I can't.
And, of course, Jimmy Jordan got some bad news from the DOJ.  Sorry, no information regarding ongoing investigations.  As one of the insurrectionists involved in that fake elector scheme, I'm sure Little Jimmy is scared shitless.  You see, Jack Smith has subpoenaed quite a lot of information from those states planning on sending counterfeit electors to vote for Trump, not Biden.  Little Jimmy was deeply involved.  At first he tried to blame an aide for submitting the phony names, but as more people squealed to save their own asses, the truth came out: it was Little Jimmy, himself, who had submitted those fake names.  And Little Jimmy is scared his ass might fry.  Sizzle, Jimmy, sizzle.