No heart, no brains, no courage

Well, it's Sunday morning and crap, they're predicting an extended period of snow flurries.  No accumulation.  There are several other storms making their way across the country, but from what I've been seeing, whatever snow they're bringing will be to our east, or to our west.

OLT (On Line Taxes) sent me an email this morning reminding me that tax filing season is upon us.  I've used them for a number of years because they were free, and filed both my federal and state taxes.  This year, that's going to change.  That won't be happening this year.  They've dropped their AGI to $41K and, well I earn a bit more than that, so I may have to use Turbo-Tax, or a similar software.

I do work today.  With the football playoffs on TV, business is going to be slow.  That happened yesterday, when business was steady in the morning, but as the day wore on and the customers thinned out.  That will happen today as well.

My first reader / editor, Patty gets her copy of The Body Under Ice today.

Saw this and had to chuckle. 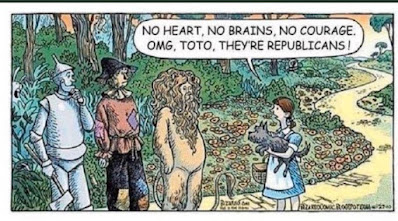 And, speaking of Republicans, have you noticed that across the country Republican state legislatures are going from wack-job to extreme?  A party that desperately needs to be in total control is slowly falling out of popularity is doing what should have been expected.  Missouri passing a law that women cannot show their arms in their senate is just one example.  They are trying to masculate women, make they less female and more manly because bare arms, like long hair, are a temptation and must be hidden.  Every day these Republicans become more extreme.  For them, this is necessary, you see, the deity they created is not giving them what they want: total control.  They believe their deity must be angry.  The only way they can appease his anger, to get on his good side, is to prove their loyalty by becoming more extreme.  They don't understand that the more extreme they become, the more people see them as pariahs.
Fasten your seatbelts because these crazies are going to get even crazier.  By not succeeding, they believe they must be doing something terribly wrong.  The truth they will never understand is that they've steered their party into a cul-del-sac of decline where they will drive in endless circles for the rest of time.