The Monday holiday.  I still work this afternoon from 3 - 7.  Business should be slow.

It is, however, and acronym holiday, mostly because Americans are lazy.  Instead of saying Martin Luther King day, we say MLK.  How much respect is in that?  Not much.  The holiday is for a great man, land it's been reduced to 3 letters.  That's it.  No more.  We no longer have a president, we have a POTUS.  Personally, I think that sounds like some sort of anal disorder.  Can't you picture someone turning the head askance, partially covering their lips, and whisper in a derogatory tone, "he has POTUS."   And believe me, while I don't like Amy Cony Barrett, I do believe she suffers from scotus, and am truly amazed how she manages to cover up all of her itching and scratching.

We had our associate Holiday Party last evening.  Ten 8 foot folding tables were put together end over end to make one 80 foot table.  For a store with 165 associates, around 55 showed up (some with friends, spouses, or other family members).  They bought food for 180.  I brought some home.  The dogs are getting meatballs.  When I go into work this afternoon, I'll have another bowl.  There were supposed to be decorations, it was supposed to be a holiday party, after all.  No decorations.  They had hired a DJ, but there really wasn't anywhere you could dance.  I don't like eating that late, but I did.  By 9:15 PM I was heading out the door since I like to go to bed around 10ish.  Morning person here, remember?

I don't know if it was because I ate so late, but I had a weird dream, sort of a Star Trek version of a Hindi ceremony that was so vivid I woke up repeating one sentence.  I wrote it down for you all to see.  "The one who is chosen is the one who choses to make the sacrifice."  Does anybody have any idea of what that means?

And since today is Martin Luther King day, here's a picture of him.  Give the man his due and say his full name. 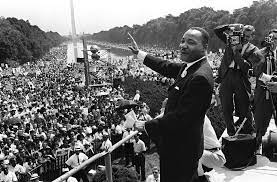 For those who missed it, Ronnie Johnson was on the Chuck Todd show yesterday being very evasive.  When Chuck asked him why the GOP was focused solely on Hunter Biden's laptop and not Jared Kushner's $2 billion gift from the Saudi's, Ronnie avoided the issue completely.  He later posted a clip of his interview on line, and that section had been edited out.  Here's a link to the Rolling Stone article.  Ronnie was not a happy camper.  He evidently has chosen not to make the sacrifice.