This is What Happens

I get to take my car to the repair shop this morning.  They're going to fix the damage from when the bitty rock bounced up and hit my fog light.  I asked how long?  Their replay:  "We don't exactly know.  Everything depends upon if there's any 'hidden' damage."  I'm figuring on 3 or 4 days.

Biggie's carprofen arrives today.  He seems to have been doing well with just the gabapentin, so his dosage may be doled out sparingly.

And, of course, everyone's topic, as I don't doubt will be the case for every blog I read, the leaked document from the Supreme Course will get my little opinionizing comments.

Has anybody been keeping count of the number of times Susan Collins has said that Brett Kavanaugh told the Senate he would not overturn Roe vs Wade?  Well, the drunken frat boy lied and now she's going to be walking around with shit in her pants for the rest of her life. 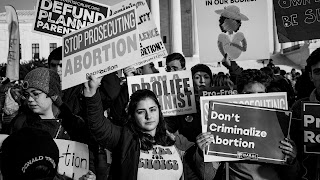 What I really find interesting is the timing of this decision, 6 months away from the mid-term elections.  while the anti-abortionists are dancing in the streets, I do not doubt that largest voting bloc in America let out a gasp of horror.  While there are a number in that bloc who claim to be pro-life, a large majority of them believe the choice for terminating a pregnancy should be theirs, and their alone.  This group does not want to be told they have no choice.  This group believes all decisions about pregnancy should be there, and there's alone.  They want to be responsible for their own bodies.  And it's 6 months from the mid-term elections.
Interestingly, running up to the primaries in Pennsylvania, for the past 2 weeks big John Fetterman has been running ads pertaining to Roe v Wade.  Big bold headlines:  They are going to take this away from you if you let them.  He's right.  This November, Democrats, and Independents, and even Centrist Republicans need to teach conservatives a lesson.  Vote Blue.