Well, we are now halfway through the Memorial Day weekend.  The temps here in Central PA are supposed to climb into the mid 80s (F).  The Central Air is on in the house.  We are heading into a mini heatwave with temps predicted to rise into the mid to upper 90s for most of the week.  Since I'm off most of the week, that's fine with me.  My lawn needs to be mowed thanks to all of the rain we've been having.

As usual, they're providing snacky things over the weekend, today it's 'make your own sundae' and there's freshly popped popcorn.   There's a cookout scheduled for tomorrow: standard hot dogs and hamburgers cooked on a grill behind the store.  Covid ended the cookouts, now they're back.

Business at the flooring desk was slow yesterday.  We were fully staffed and most of us ended up pretty much pissing the time away.  Not that our specialty manager did show up from time to time urging us to find some busy work.  He wants us to be aggressive salespeople, so he looks good.  We gently ignore.  The decision was made to give free measures this weekend, they usually cost $35, but that's deducted when you purchase your install.  People weren't buying it, even for free.

Here's an old picture of Lily.  Ain't she just the cutest little lady? 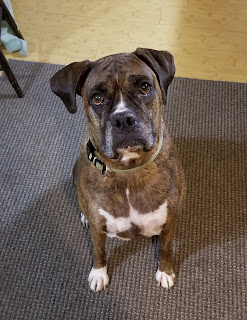 A few days back I mentioned how the Republicans were again hinting that they might be open to some form of gun control, and that it was as fake as it ever was.  This morning, the Washington Post said the same thing, however they put the blame on McConnell.  The terrible truth is the Republicans have a base that will always vote Red as long as the GOP stops gun control in its tracks.  Those voters are a sure thing.  There's no way they are ever going to do anything to lose those votes.  That group alone, however, is not nearly enough to get Republicans elected to office.  The time has come to teach them a lesson.