Shall we say "Hello" to the turbulent 60s again?

Three hours until I leave for work.  Wonderful.  Temps today are supposed to match yesterday's, low 90s (F), though today they're calling for thunderstorms.  Tomorrow they will only climb up into the mid 70s (F).  If the long-range forecast is correct, every afternoon should find them hovering there.

I spent a lot of time working on the tall tank, which is the one in the living room housing the 12 barbs: rosy, golden, and spotted, 4 of each.  While I don't have to work on at least one of the tanks daily, they each get their walls cleaned at least 3 times a week to keep the algae down.  I've come to the conclusion that most of this added green growth is the result of the LED lighting; it's so much brighter than the old fluorescent bulbs we had when I was a kid.

My peaches are growing very fast.  And the flowers?  Wowza! 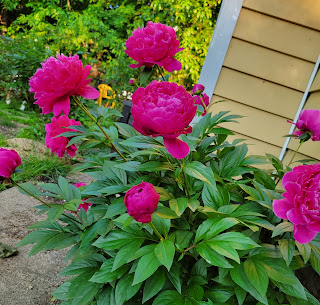 Conservatives trying to foist their agenda onto America are running into all sorts of problems.  This doesn't mean that they care, at least not yet.  They will.  The last time this country embraced social conservatism this badly was back in the 1950s.  Most conservatives today have either forgotten, or are too young to remember, but that decade led to the turbulent 60s, not that those years mean anything to their shortsightedness.  I'm old enough to remember when you started your school day with both prayer and the Pledge of Allegiance.  Today's politicized evangelicals want those days back.  Without their ability to begin grooming students at such a young age, their future is in jeopardy.  What they never counted on, however, is the youth of today; young people who have grown up with gay friends, and brown friends, and black friends.  And these young people are growing angrier by the day  This is not what conservatives want.  They need a majority of Americans to become sheep, to bow their heads and lo their acceptance.  Well, that ain't happening soon.