So, we're into Saturday of the Memorial Day weekend.  I work.  Only 5 hours this afternoon.  Most of our business is done in the morning to early afternoon.  Things should be heading into the slow down period as I pull into the parking lot.  That's fine with me.

If you're looking for an appliance, this is a good time to buy.  Or paint, we usually have a paint sale over the holiday weekend.  While I can't say for certain, since I only occasionally work in that department, I'm betting there's going to be a rebate coupon.  I can remember a time when there was an actual 'sale,' but then some smart guy from corporate realized that not everybody gets around to turning in their rebate coupons.  Translation:  If you don't apply for the rebate, you bought the paint a full price and they make more money.

Here's a blast from the past.  A picture of what my dining room ceiling used to look like.  Don't you just love the raspberry trim on the staircase and the grapevine border? 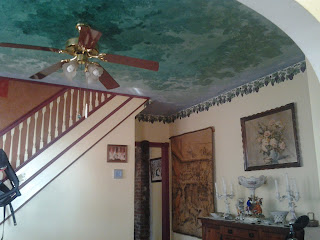 One of the things frustrating Democrats over the last elections cycles has been the inaccuracy of the information pollsters put out.  Predictions of victory have made us complacent.  A number of people didn't vote because they believed Hillary was a shoe-in.  Could those polls have been any more wrong?  While the polls aren't entirely to blame, they are one of the big reasons why we ended up with the Spawn of Satan, Donald Trump in the White House.
Why do I bring this up now?  Well, this morning Newsweek sent me an article about Florida and how the polls were saying DeSantis had a large lead.  Double digits in some cases.  Of course, I'm smart enough to recognize conservative propaganda when I see it.  While one of the pollster's names was recognizable (FiveThirtyEight), the rest were not, and the data these pollsters were supposedly referencing was from back in February.  The article was meant to hearten Republicans and dishearten Democrats and I don't doubt for a second it worked for some individuals.
The truth is that most polls are bullshit because most people realize a political tool when they see one.  Here's some advice on how to use this tool.  If your phone rings, and you answer the unknown caller, and it just happens to be a pollster, lie.  Republicans have been doing it for years.  Tell the pollster you worship the holy MAGA worm.  You see all those pre-fascist Republicans will suddenly begin to pay attention to the polls once they believe they're winning.  Make them think red voters are going to take the midterms in a landslide.  And then go vote Blue and vote those dumbshits out of office.