We've had over 24 hours of rain.  The forecasters are not calling for it to end until early this afternoon, about the time I head off to work.  At that point, the sun is going to slowly appear, the temps will slowly creep up, and the grass will begin to grow like hell.

Today is also the first day of Kids Workshop, and, as I said, it's raining.  I have no idea how many parents show up with their kids, prior to Covid it was not unusual to get between 250 and 300.  That place is going to be a mess, which is why I'm no longer available to work before 1 PM on Saturdays.

Because yesterday was rainy, I found myself doing very little... other than snacking my way through the day.  Not a good thing.  I didn't step on the treadmill, didn't climb aboard the bike.  Instead, I puttered around trying to take selfies with the dogs.  If I'm standing up, they listen.  If I'm sitting on the floor, they do not.  With that being said, here's a very rare photo of me and Biggie.  Word of warning, this might burn out a lot of pixels in you monitor. 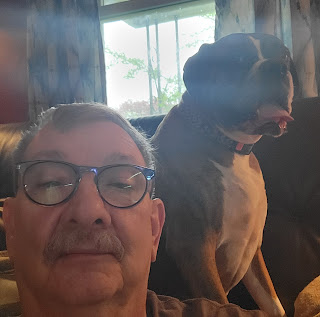 Evidently the Orange Anus had a rally yesterday out near Pittsburgh... in the rain, for Dr. Oz.  The cultists were not enthusiastic.  The local police were supposed to help with security, but that got canned.  Usually they will run the metal detectors, however his team wanted them to actually be security, however their attorney axed that fast.
It was supposed to help Dr. Oz. who's not too popular among the MAGA base being that he's a Muslim on top of being an alien, well, not quite an alien, he has dual citizenship.  It seems as though the Republicans are grating themselves to pieces in Pennsylvania.  Good.
One on the speakers yesterday was JD Vance, the Trump backed, hillbilly author, who just won the Republican nomination for senator in Ohio.  People pointed out that it was Trump's candidate that won, but those people should probably hit the brake pedal.  Vance ended up with a little over 340,000 votes, however, over 680,000 Republican voters in the state of Ohio cast their ballot for someone else.  Someone needs to tell the Republicans Vance did not have a stunning victory.
And, finally, yesterday Clarence Thomas said that Americans need to stop bullying government intuitions.  This makes him look like a hypocritical piece of shit after his fat wife tried to bully Congress into decertifying the election.  Isn't it time we flushed this turd?