Well, hello Weekend.  While today maybe Saturday for a lot of you, today is my Sunday since I have to work tomorrow... and Monday.  But then I do have another weekend.  In fact, next week I will be working 4 (count 'em) days, though they will not all be 8-hour long days.  I am part-time, remember?

Yesterday turned out to be a bit of a slugfest for me.  I played the part of a slug.  I did clean the one aquarium, and I went to the store, and also put some work in on The Body Under Ice, but mostly I sat around waiting for The Elden Ring to load.  Holy Crap.  Hours and hours it took.  As with all games, there is a tutorial prolog to play through to teach you which buttons on the controller do what.  However, the second I exited the tutorial, I got my ass killed by a big knight with a big sword.  As for character, I'm playing as a male wretch, which means I get to run around wearing only a G-string.  Don't worry, at some point I will get a cape to make myself more dashing.

Flower wise?  My buds are finally beginning to bloom! 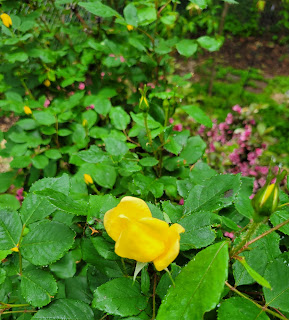 And we need to begin prepping now for the November elections, not so much because a majority of us will find them earthshattering.  Rather, we will need to deal with all the Q'anon crackpots like Doug Mastriano who will not take losing badly lightly.  They desperately want to adhere to the belief that Trump was sent by the deity they worship to make America socially conservative.  All deniers need to believe that they have the power, that they have been chosen to lead America down their crookedly righteous past.  To even consider otherwise would be to commit blasphemy.  Losing marks that authority as being weak, and that cannot be.  Understand this, these losers will be nasty as Hell.