The Time has Come

Well, can I get a bright hello to a drizzly Monday morning?  Humidity, showers, and possible thunder showers are in our forecast.  Whatever we get, you can bet it is going to make the grass grow.

Work was slow yesterday, up until the last half hour, then I signed up 2 couples for measures and possible installs.  That should make the big boys happy.  They're always looking for sales.  I don't mind selling measures and installs, as long as I don't need to work too hard.  Semi-retired, you know?  The Gung-Ho days are long gone.  Not that I was ever really Gung-Ho about any of my jobs.  I did them well enough to get decent pay increases, but I was never a 'do or die' loyalist to management.  Being in management was nice, but I never felt to need to keep climbing.  Maybe I'm just not greedy or selfish enough.

I work with an associate who's like that, has a 5-year plan.  He, however, sees managers as being that group of people who do less and have others do more.  Hah.  He wants the authority without demonstrating the require work ethic.  We did just bring in a new assistant manager... who walks around wearing a small backpack.  Yesterday, as I was leaving, I saw the wannabe sporting... you guessed it, a small backpack.

The latest book cover is now on the wall.  Next up, The Body Under Ice. 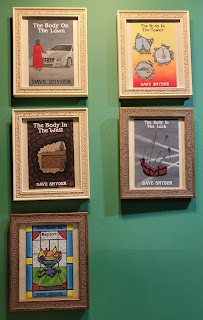 Of course, we had that horrific shooting up in Buffalo and, of course, we have crass Republicans desperately trying to be more vulgar than the next.  I saw where that white supremacist Wendy Rogers said it was a 'false flag' thrown up by the Feds.  Someone needs to start punching her in the mouth every time she blurts out her stupidity, not that she'll learn anything, but at least someone will have the pleasure of punching her in the mouth.
In fact, we, as a party, should have started punching back a long time ago.  Remember when Michelle Bachmann used to claim there was a war on Christianity?  Well, we should have started bopping her upside her head back then, rather than play Mr. Nice Guy.  All you have to do is look around to see where being nice has gotten us.  A minority group has managed to squeeze themselves into the power seat and their hatred of everything that isn't, by their standards, socially conservative, is under attack.  Over time, they will only get worse as they attempt to rule.  The time has come for bopping them upside their heads.