Well, yesterday was... different.  After dropping off my car at the repair shop, I was chauffeured to Enterprise to pick up my rental.  I had already decided that I would ask for an SUV; I hate sitting low to the road.  My agent, a young man named Sean who looks very much like a shorter version of my friend Justin, who's 6 feet 6 inches, surprised me with my options, which were limited.  That's right, there was not a great selection.  What I ended up with was this: 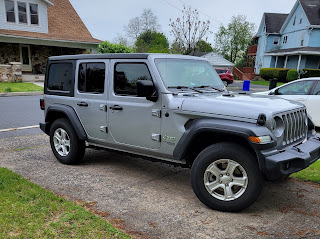 That's right, I'm in a Jeep.  It's okay.  I told a friend last evening that if I was ever wealthy enough to feel I needed to own 2 cars, a jeep might be one... but then again it might not.
As I said, yesterday turned out to be...different.
Sadly, most of the day was spent scanning news releases and social media for opinions on the Supreme Court's decision to overturn Roe v Wade, (with a smidgen of interest in the Ohio primary).  Some conclusions:
A majority of Americans now see the Supreme Court as a political tool of the far right.  Evidently Alito affirmed this when he said, "our decisions are not dependent upon public opinion."
There are a lot of whispers that the leak was done on purpose, hoping the fallout will be over by the midterms.
The only ones happy about the decision are Republicans, who are more concerned about the leak.  However, the shit sock that hit them in the face yesterday, is going to hit them in the face again at the end of June when their decision is made official.  They are too giddy to understand the coming repercussions, and this is important, because they don't see it as a shit sock.   This is evidenced by Lyndsey Graham's comment about this will probably have some impact on the midterms. Of course, when have conservatives ever demonstrated any concern for anything other than their own selfish objectives?
Susan Collins and Lisa Murkowski?  The Conservative Boys Club they wanted to so much be a part of has just shit on them both.  People are calling Collins and easily duped dumbass.  Her political career is now over, and the Conservative Boys Club doesn't care.  These women are no longer useful.
Republicans will never understand that being selfish and self-centered doesn't make them smart.  This is their ultimate "shut up!  We're in charge!" moment.
JD Vance won the senate primary in Ohio.  He was backed by Trump.  Mandel, who had been a moderate, flipped into a radical rightist lost.  Had he stayed moderate, like DeWine, the Governor, he might have won.  I do not have too much confidence Vance will carry the election, being a Trumper, the Supreme Court decision will most likely doom his candidacy.
And, to end on a cheery note:  May the Fourth be With You.