Waiting for the Death Knell

Ah, my weekend begins.  I'm going to enjoy it thoroughly.  Going back to the store on Wednesday, I will be heading into a 6 day work week.  We all know how much I enjoy 6 consecutive days at work.

As is becoming a usual habit for me, I stayed up late watching a series on TV.  Originally, I had planned on watching Army of the Dead.  Zombies can be really exciting.  However, when I signed into Neflix, the trailer for Jupiter's Legacy caught my eye.  Or, perhaps I should say Josh Duhamel with long hair and a beard caught my eye.  Aging super heroes with kid problems.  The storyline unfolds on 2 timelines, with the stock market crash of 1929, and in the present.  The first episode introduced the kid problems, as well as a dated code of super hero ethics.  Yeah, ethics do come into play here.  Anyway, I do not doubt it is much better then Army of the Dead, which was directed by Zack Snyder, whose movies have a reputation for letting the audience down in the end. 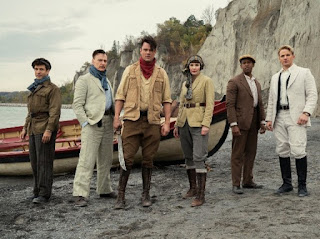 Yesterday was a slow day for flooring sales.  I didn't mind.  Sometimes, on slow days, the next story evolves in my head.  I like that.
Politically, Adam Kinzinger had a very good day.  Republicans really should start listening to him.  Trump Republicans will not.  He knows January 6 is going to have a humongous effect of the 2022 elections, and not in a good way for Republicans.  They, on the other hand, believe 2 things:  that the losing party in a presidential election always gains seats in the House and Senate in an off year election, and that those 74 million who voted the Loser #45 are going to cast their ballots Republicans.  These are falsehoods.  The party has a reputation for falsehoods.  A large majority of Americans want a commission to investigate that insurrection.  Were that to happen, the death knell for MAGAs would start tolling.  However, preventing a commission from forming is going to start the death knell for MAGAs.  This is what happens when you sell your soul to an Orange Anus.