I started my one day, mini-weekend this morning by sleeping-in.  I stayed up watching Star Trek, Discovery.  I'm in the middle of a 2 episode focusing on Michelle Yeoh.  It's okay.  I'm not wild about stories that need 'to be continued.'

The Lebanon VA just called to make an appointment in November to check my A1C... on my birthday.  I Googled it and found out the test checks on sugar levels for the past 3 months.  This may not be surprising to some of you, but I've always been borderline when it comes to diabetes, and cholesterol, and blood pressure.  Even my Glaucoma is borderline.  What this means is that I need to exercise more and cut out some of the sugar making carbs.

I checked this morning and Mr. Toad was gone.

Oh, and as I'm typing this, I'm also putting an iron-on patch on my jeans.  They should last for another year or so.

And, of course, my flowers are beginning to bloom. 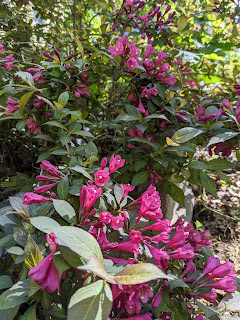 Of course, the GOP took revenge on Cheney with a vocal vote.  Usually these votes are secret, but had they done that but they knew doing that would have shown how badly divided their party is.  They did this to kiss the ass of Loser #45.  Warren says the party is eating itself and finding out the meal is poisonous.  The fact that one of their members compared the attempted coup on January 6 to a normal tourist day is an indicator of how far they'll go to disfigure the truth.  They will give the Loser what ever he wants, so prepare yourselves, at some point they're going to start sacrificing chickens, eventually moving on to goats, and sheep, and finally virgins wearing a red hat.