Eggs, and other things

So, they drew my blood yesterday morning.  Only 4 vials.  I guess their wonderment is over, or else my new Dr. didn't feel the need.  Oh, and I didn't have to pee in a little plastic cup.  Crap, and purposely drank 4 cups of black coffee to insure they knew it was 'ground' not instant.
And the weather was fairly nice through out the early morning hours, so my veggies got planted.  I also took a few pictures.  They'll be forthcoming.  Something else took precedence.  Something that momentarily put the brakes on everything.  A 'son of a bitch' moment that sent me upstairs looking for answers on my computer.  And just what was that moment.  This: 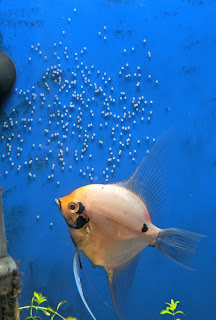 My angelfish laid eggs across the back wall of the tank.  Now, if I wanted to I could run out and buy a separate tank, and filter, and heater, and use a turkey baster to move them to the new tank.  If I did that many would survive.  Or, I could let nature run its course.  Most of the fry would become food for the other fish and may 2 or 3 might survive.  I'm opting for the nature route mostly because now that I know I have a breeding pair, I can expect this same thing to occur every 3 - 4 weeks.  That's a lot of baby angelfish.  I will stop by PetSmart after I leave work and pick up some sort of 'fry saver,' to give the babies a fighting chance.
I didn't really pay any attention to what the rabidly raving Republicans were doing yesterday.  Too much other stuff was happening.  I did see Green and Cruz have begun some sort of insanity roadshow.  This is fine.  They will satisfy their every shrinking base.  Come election time the Texas airwaves will be spinning with his adventures in Cancun  during the Great Freeze.  And if that isn't going to be enough, the Texas legislature is working on a little agenda to make the taxpayers pay for fixing a system that killed quite a few of those very same taxpayers over.  And as for Greene?  Everything she says and does is going to bite her in the ass.
Finally, for those of you who don't know, one of my favorite bands of all time, if not the all-time favorite, is Yes.  I had a good time last night watching this classical musician analyzing one of their greatest songs Close to the Edge.  As I said in my comments to him, I've had the pleasure of seeing Yes perform this song 4 times in concert.  Here he is:
And here's a live version from 1972 ( I saw them do this song in San Diego that year).  Oh, and that spangly, gold cape Rick Wakeman wore was about 15 feet long.
Posted by Dave R at 8:11 AM