Well, it's going to rain again.  The drizzle has already begun.  The plants are growing, and my yard will soon turn into a rainforest.  Climate change is occurring.  NOAA says things are getting warmer... and wetter, depending upon where you live.  For us here in Central PA, we seem to be getting both blessings: higher temps and rain.  We are turning tropical.  That means mangoes, and lemons, and limes will be common.  Florida?  That state is going to cook.  So are parts of Texas.  That large migration south will soon reverse as the temps continue to rise.  Change is upon us.

The Baby's Breath in my tank is gone.  Replaced with Jungle Vallisneria and a Windelov Java Fern.  I think it looks much better.  The fish now have room to swim.  Oh, and the fish aren't mutating out of shape.  The tank's acrylic, so there are no framed corners. 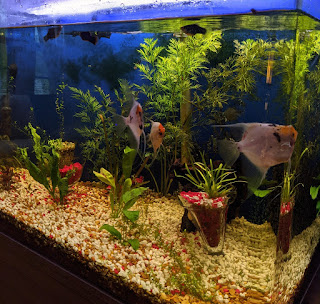 Work is normal; beginning to slow down I believe.  While our garden department is hopping, our overall sales figures are not as high as they were 4 months ago.  As the country continues to slowly open up, this slow down will continue.  People no longer working at home and having to commute again are going to have less time on their hands.  They will have less time for home improvements and so those plans are being moved to the back burner.  This was to be expected, though a cursory look at our plan shows our corporate offices were hoping the spending would continue longer.  Instead, sales are becoming a steady simmer, which is good for a beef stew, but it's not like the rolling boil you want for cooking pasta.
As for politics, evidently a vast majority of Republicans want Loser #45 to remain active in the party.  They have no problem with the fact that his, and their, anger cooked over on January 6.  They are actively pursuing the belief in The Big Lie.  The reality that a sizeable chunk of Republicans changed their affiliation after the Insurrection means nothing to them.  For them, volume is everything.  Anger is the tasty sauce they lavish on their burgers after taking them from the grill... anger, and a lot of moldy cheese.