Can you believe it's Thursday already?  At least it is in my part of the world.  I slept well.  I'm in a good mood.  I have a $23,000 flooring sale pending.  What could make life rosier?  Besides... to be honest, not having to spend 40 hours a week as a flooring specialist might put a pinker glow on my world.  And truthfully, that glow needn't be pink.  A nice, golden yellow would be nice.

Oh, and speaking of yellow, my Itoh peony has bloomed.  For those of you who have never seen a yellow peony, here one is.  This handsome man took over 4 years to reach blooming maturity.  Well worth the wait, wouldn't you say? 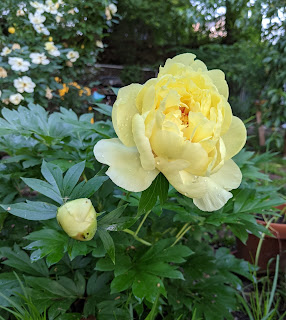 I ordered a new kitchen scale and it arrived yesterday.  Since I need to watch my 'simple carbs,' I decided I should start watching everything: calories, carbs, proteins, sugars... you name it, at least for the time being.  I had an old Polder scale, but years of gathering dust had taken their toll.  Wait, that's not exactly true.  I used the little guy for cooking and baking when the recipes were in metric.
Can we talk about lose / lose situations?  Like the GOP.  Their sold their souls, lock, stock, and barrel to an Orange Anus because, as they say, "he tells it like it is."  Thanks.  Now we know they really don't like Democracy, or at least Democracy where people get to vote.  We know they care more about corporate donors and the 1% then they care about America.  We know they have no problem twisting mythology in any direction possible as long as they convince a small base of dedicated followers they are acting on a Higher Authority.  And, because of their actions, we also know they are a minority group bent on domination.  How do you treat a minority group.  You stomp them out.  You go to the polls, no matter how difficult they try and make voting, and vote them into obscurity.  The want you to forget January 6, remember it with anger and hold them responsible.  Do not let them tip the scales with their lies.