Well, not only is it Sunday, it's Mother's Day as well.  I'd wish all Mother's out there a happy day, but like most of you, I really do wish some of those Mothers would simply go the hell away... if you get my drift.

I bought some fake grass to hang as a protective barrier in front of the Angelfish eggs since I do want to give them a fighting chance.  It must have brushed against some of them while I was hanging it because this morning about 25 had turned white, which means the egg died.  That sounds like a lot, but there are still around 150 still viable.  In about 4 more days the fry should be swimming.

Yesterday was somewhat busy at work.  We have 3 weeks to go until this season peaks.  After Memorial Day, business begins to slow down.  Believe it or not, that slowdown has already begun mostly because costs are going through the roof.  Wood is very expensive.  I hear customers complaining regularly.  Your average 2 x 4 stud has quadrupled in price.  Our 'best' carpet pad went up 15 cents a square foot.  That's a big price jump.  And I don't buy all the crap that all this price changes are pandemic related.  I'm betting all the way down the line people are using that excuse to increase their profits.  Oh, and believe me, prices are not going to go back down to what they were.  They might drop a smidge, but that's about it.

My yellow roses are ready to burst into bloom.  I'm going to have to spray for blackspot, but that can't happen until we've left these rainy days behind.  Maybe next week? 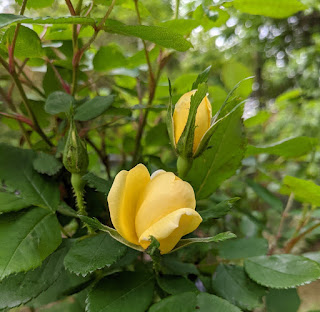 And finally, I guess some of you saw how Gaetz and Taylor Greene have teamed up for some sort of Loathsome Liars Tour.  There released some vids of residents in The Villages cheering them.  Keep in mind, those residents are all quite wealthy.  Their only concern are the total dollars in their bank accounts.  They also hate taxes.  Also keep in mind that for everyone of them, there are 10,000 other seniors who don't have their wealth, and who can't afford to buy a home in The Villages.  Those residents are greedy as hell, which is why Loser #45 did so well among them.  Personally, I think we should raise their taxes so they know how the rest of us feel.