The Truth Terrifies Them

Sunday Funday.  Kind of, kind of not.  I am off work.  I also slept in late because I stayed up late (very late) and watched the final episodes of Star Trek, Discover, season 3.  I enjoyed it immensely.  Now I'm waiting for season 4, which is supposed to begin streaming in November.

The large, orange home improvement retailer I work for is going to keep us masked until further notice.  Our Governor, Tom Wolf, said more restrictions are going to be lifted on May 31.  As you might expect, there whines rising from the Republicans.

On the garden scene, the rose in my front yard is beginning to burst into bloom.  Interestingly enough, the color seems to have changed from an orangey coral, to a reddish coral.  I have no idea how this could happen... perhaps something in the soil? 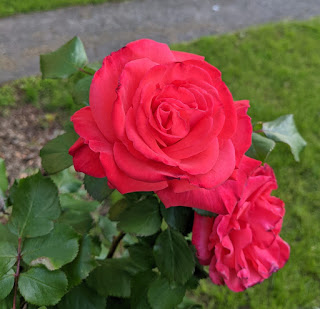 I'm going to my brother's farm this afternoon for some sort of belated Mother's Day gathering for my sister.  I was going to bake a golden cake with fudge icing until he asked if I could bring either macaroni or potato salad.  So, rather then making something delicious from scratch, I stopped by my local Giant Supermarket and picked up a gallon of each.
And, of course, people are noticing another big Republican hypocrisy:  they shriek and moan about how the left is cancelling things they don't like, while at the same time cancelling the voices who call them out for being frauds and liars.  You don't have to think long to realize this has always been the truth.  Their whole political movement has supported one lie after another while simultaneously attacking all criticism.  Let's be honest hear.  The Big Lie actually began with Reagan's landslide re-election, they decided America was actually Conservative, not Centrist.  For decades they looked for another Reagan and found... no one.  Instead of re-evaluating his win, they turned into the Tea Party, which mutated into the MAGA base they now have.  The Big Lie now blames everything on massive election fraud.  It's so much easier for them to believe that, rather then the simple truth that they're nothing but a group of sore losers.  The truth terrifies them.