I see Blogger has been fixed.  Last evening, when I started reading through your blogs, I got error message after error message.  None of you were safe because blogspot was prone to phishing.  Of course, I ignored the warnings because it was everyone on Blogger.  Pain the ass is what it was.  And this morning?  No problem at all.

Since I still own a lot of vinyl, I've been thinking of purchasing a turntable.  There's really not a great debate going on in my head.  It's kind of like a... meh... should or shouldn't I.  What will most likely happen is that one morning I'll get up and just order one that's new, spiffy, and Bluetooth.

And I don't really want to go in to work today, mostly because I suspect some pain in the ass customers are going to show up.  I sold them their measure back in early April.  For a while, they didn't want to be bothered.  Tuesday evening they showed up with complaints about everything.  Ignorant complaints, one being they couldn't understand why we were putting padding on the risers of a staircase.  Believe me when I tell you this is a really stupid whine.  They complained that the cost of the quote was much higher then the estimate and, of course, it's actually several hundred dollars lower.  We had to send someone out to do a remeasure.  If they really raise a stink, I'll simply refund their measure fee and send them packing. 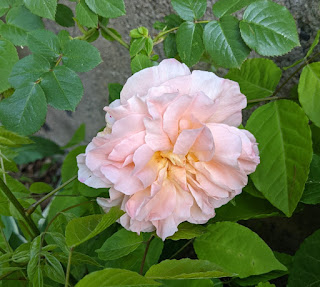 And the war between the Republicans is heating up.  One can only wonder what's going to happen when Loser #45 gets indicted.  Oh, and that's just a matter of time.  Evidently he has to travel to New Jersey and stay there for the next couple of weeks.  There's concern that it will happen while he's there.  Can we talk about fury?  The MAGA's will erupt and we'll get to see their lava anger.  This will be hotter than the anger they showed when Reagan was forced to testify at during the Iran / Contra investigation.  I mean, how could we do something like this to their false god?  As their anger seethes, their party will continue to attack itself because there is a growing group that is going to blame him for there troubles.  If we're lucky, Tucker Carlson's head will explode while he's on-air.  Damn.  How can you beat that for entertainment value?