The Art of Compromise

So, yesterday was the end of my weekend.  I was busy.

I had a plumber come and do several fixes.  Unbelievably pricey.  I don't mind paying for quality work, and let's be honest here, prices are much higher then they were fifteen years ago.  While we think we can estimate accurately, we can't.  $100 doesn't go as far as it used to go.  How do I know this?  We have customers who go through the registers and pay with $100 bills.  Thirteen years ago, when I began working for the massively large, orange home improvement retailer, you never saw that.  Now it happens almost daily.

As for the plumber, he did fine work.  He installed a new shower diverter, the old one leaked badly.  The shower's upstairs and there's about a 10 degree difference from the ground floor.  He was wearing a thick, green sweatshirt.  When he told him he didn't need to wear it, he said he had tats and some people didn't like to see them.  That made me laugh.  "I work at Home Depot," I said, "do you have any idea what I see on a daily basis?"  The dogs loved him.  They thought I'd given them the best toy ever, and were sorely disappointed when he left.

Besides getting in a bike ride, I also got a number of loads of laundry done.  Hay, I even mowed the tall, tall grass I like to call a lawn.

And, of course, everything is blooming.  The flowers on this bush are very pretty, but have no perfume. 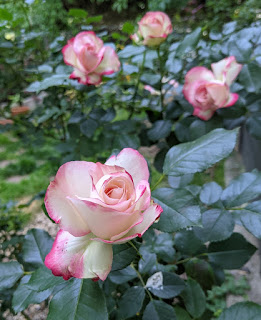 I find it interesting to see how easily the Republicans have cleaved to the will of Loser #45.  They will do anything to gain the favor of his base, even though that group now only makes up about 25% of the electorate.  Republican congressmen will unify around anything they believe will help them regain control of both the House and the Senate.  Democrats, on the other hand, do not.  Take the $1.9 billion security bill the house just passed.  The "Squad" almost tanked it.  They made headlines by doing so.  Among our Democratic Congressmen, they have become the party of 'no.'  At times, I think they do not understand the art of compromise; a little give here, a little take there.  This is one of the reasons we lose at local elections.  Our message is filled with scattershot landing all around the target.  For the sake of America, these people need to learn to compromise.