We are now 3 weeks away from spring.  Ain't it great?  I have begun ordering decorations for the seasonal tree and they should start arriving any day now.

I made beef stew in the Instant Pot yesterday, took 35 minutes.  Tasty, but not great.  The recipe called for a can of tomato sauce, which gives it too much of a tomatoy undertone.  I want my beef stew to be hearty, with a full beefy flavor, not like I poured in a can of spaghetti sauce by mistake.  Otherwise, the recipe is sound, I'll just have to find an alternative sauce... or gravy.  Oh, and add more potatoes. 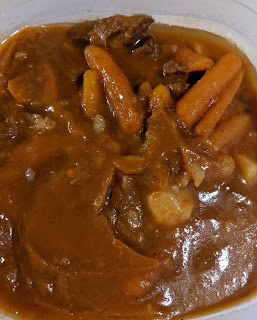 Speaking of beef, Lily is running around the house with the tip of a Puperoni sticking out the front of her mouth like a meaty little cigar.  I warned her, she better eat that thing or Biggy will.
The hate festival that is known as CPAC is now over.  I don't know for certain, but I do believe only white Evangelicals attended, many of whom, though not all, swore their allegiance to Failure.  In a straw poll, their Loser president only received 55% of the vote supporting him for a 2nd presidential run in 2024.  Ouch.
And, of course, there was a bit of an issue with their stage.  Someone though it a great idea to design it in the shape of a rune used by the Nazis.  Hyatt Hotels is pissed, putting a press release slamming hatred.  Let's see... I guess that means this year's CPAC celebrated a golden statue, a Nazi symbol, and a tin foil dictator wannabe... Did I miss anything?  Here's a picture of the stage, and the symbol, and also a flag from the riot of January 6.  Are there any questions? 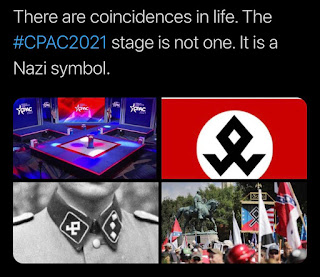 Can they get any more evil?