They're forecasting a high in the low 70's (F) today, though there will be drizzle and showers throughout most of the morning and afternoon.  I work, so I can live with that.

I've decided to replace my dahlias with poppies.  Originally I thought of doing a separate bed, planting them among the ranunculus, but whimsy took over, and I'm sure that by now most of us know what happens when fanciful steps onto the stage.

A fellow blogger opined that many masculine gay men are using their masculinity to hide their true effeminate nature, of course I had to disagree.  That's like saying lipstick lesbians are really hiding their true desire to shave their heads and buy a Harley.

Isn't it interesting that there was a bit of discussion on this blog about Kamala Harris not being in the limelight just a tad bit more, and then yesterday comes the announcement she's going to spearhead the immigration issue.  Damn!

And... of course, yesterday Rachel Levine was confirmed as Assistant Secretary of Health.  Two Republicans voted for her:  Murkowski and Collins,.  Rachel is now the highest ranking transgender woman in the Federal Government.  Can we talk about making history?  Or maybe the topic should be the evolution of America.  The prayers of so many Cracker Jack Crazy Christians that she be denied this position were left unanswered.  In fact, many of their prayers are being given the cold shoulder.  This is a lesson they cannot learn.

As for Rachel?  She's a Pennsylvania girl!  Now ain't that nice!  Let's give Rachel a round of applause! 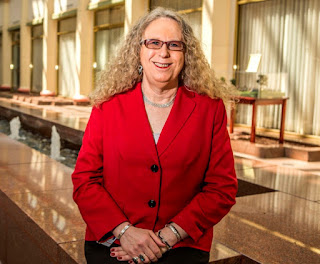