I had my eye exam yesterday.  The pressure in my right eye is 22, in the left it's 20, which are boarder line pressure readings...  However, mine haven't changed in 3 years so that might be standard pressure for my eyes.  I'm scheduled for another pressure test in 6 months.  That's fine.  I do have a several vials of prescription drops sitting in my refrigerator which have expired, so they're getting tossed.

There were a number of people at the VA clinic getting their Covid shots.  No line.  If I had waited, I probably could have gone there.  It doesn't make any difference to me.  I don't mind driving down to Lebanon.  Every time I go down it's old home day for me as I drive through the town letting the memories wash over me.  Never forget your youth.

My brother is now saying Covid is a horrible disease.  He has come a long way from when he said it was serious.  That happens when someone you know gets sick.

And the decorations have begun to arrive for my Spring Tree.  It's going to be so different from the Winter Tree.  More colorful.  I can't wait until the first day of spring to start decorating.

And what about that Madison Cawthorn?  The pretty boy fascist from North Carolina. 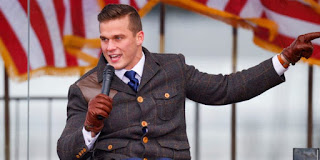 Fictionalist might be more accurate.  Or lying sack of shit.  Or how about just calling him a Republican since that covers all the above bases.  The Charlotte Observer has called him a GOP Creation and a North Carolina embarrassment.  I don't doubt for a second that he is without conscience.  He's lied about the accident which left him paralyzed, accusing the driver of the car of running away.  Didn't happen that way.  He's said he was nominated to go to the Naval Academy by Mark Meadows and was accepted.  That didn't happen.  His nomination was rejected.  And the sexual harassment claims are beginning to pile on.  I'm sure there are many who find his looks pretty to the eye.  Don't believe it.