Today my 5th consecutive work day ends.  Tra la la!  And they're bringing in Mission Barbecue for our meal!  Part of our Success Sharing!  And tomorrow I have off.  I've already begun the laundry.  Nothing wrong with getting a bit of a jump start, you know.

The store was booming yesterday.  Warm sunny weather brings out the Spring shoppers.  In fact, we were so busy I spent about a half-hour on one of the garden registers.  Believe it or not, that can be a lot of fun.  Sure, there is always a chance you're going to come face to face with a legendary asshole, but that's how life is in general.  Most of the silly MAGA's have stopped wearing their hats.

Today, business will will be off.  Heavy rain is in the forecast.  In fact, the drops started falling just a few minutes ago while Biggie was out.  I toweled him off when he came in.  He loves that.  In fact, being briskly rubbed with an old, but still luxurious towel, is probably the only reason he will go outside in the rain.  That and a biscuit, of course.  I just bought 7 lbs of Gravy Bones, their favorite.

And I spent some time looking at old photos of old night clubs.  I was not impressed with The Stork Club, though back in its heyday it was the favorite watering hole in New York if you were a celebrity.  People were packed in like Sardines.  Ciros, on the Sunset Strip was more spacious, though all the draperies kind of give it that old faux French Cat House look. 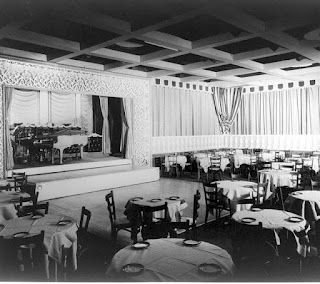 And what about Debbie Birx now saying hundreds of thousands of lives could have been saved?  Guilt is a terrible burden.  Not being a particularly religious person, I don't know for sure but I'm thinking she believes simply being silent sold her soul.  Good.  Let her spend the rest of her days drowning in regret.
And finally, I understand Ted the Liar, went to the Mexican boarder and filmed some sort of mockumentary report... and all he did was earn people's laughter.  But then you laugh at fools and their mockumentaries, don't you?  Ted the Liar's future history was made when he decided to jet down to Cancun for a vacation during that horrific Texas Freeze.  Selfish, self-centered, and full of shit, this sucker's going down fast.