Thursday morning.  Showers and rain are in the forecast.  The dogs came in after their first pee of the day a little drizzled, not enough for them wanting to be towel dried.  They love being towel dried, even if the sun is shining overhead.

I had 2 nice sales, one from a gentlemen who said, "they just deposited the money in our bank," and another from a woman who said "thank you, Joe."  Both had debit cards, and both had limits as to how much they could spend, which meant using 2 different cards, making the payment process a smidgen more difficult.  Not much.  I said to the woman, "quite a few people are doing with those checks what they're supposed to be doing," and she smiled... and smiled... and smiled.  Wow!

Guess what I bought myself: 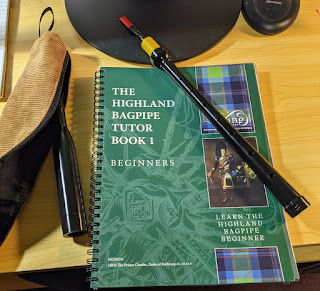 I mean, I've been writing about a murder in Scotland, and there is a bit of piping in the book.  I found out last evening I have to practice standing up.  The dogs love it.  Every time I pipe a note they have a Wow! moment.  Besides, if I'm halfway good, I might actually buy a set of pipes... maybe even a kilt, and not because I want to adjust my sporran in public.
I saw where the Republican Attorney General from Ohio has sued to block some of the stimulus package.  I glanced at his complaint briefly.  Something to do with the money going to the states and the specificity of how the monies are used.  Really, all you need to know is that he's a Republican and as such his main complaint is not constitutionality, rather he's trying to blunt the popularity of the stimulus packaged.  His job is on the line.  There are, I believe, 17 other Republican run states that are also complaining.  The want to infuse the idea among their constituents this is one horrible package for the sole purpose of tampering down the popularity.  This package is horrifying them.  The might loose control.  Believe me, if they think this is horrifying, they should hear me practicing on my chanter.  Wow!