I get to go back to work today.  This is going to be one of those odd weeks.  Rain today, and tomorrow.  The temps are supposed to be warm, but few go out buying their garden supplies in a constant drizzle.  This is also the week of our success sharing bonus - I understand the theme is Circus, Circus, Circus.  We used to have big events where the entire store gathered together to celebrate.  Now we have safely distanced smaller events with more food.  I prefer the new ones over the old.  I'm not a big event, celebratory kind of guy.  Going to a big party is not my idea of fun.

Yesterday much yard work was accomplished, the dogs were walked around the block, and a played Valhalla.  Oh, and I went for a bike ride somewhere in Germany.  The rides are fun, though in a survey Tacx sent me, I noted more rides in America would be nice.  Right now there are 7, and they're GPS rides, meaning there is no real video, just a GPS map your icon moves across.

Polls indicate LGBT individuals are finding more and more acceptance in America.  You know this is driving the Cracker Jack Crazies... well, crazy.  I don't know if you've seen or heard about any of the Rants from Tony Perkins, but according to him America is teetering on the edge of a quick slide down into hell.  His real problem is that those accepting his mythological basis for hate are in the decline.  This has always been a problem with mythologies, time always reveals how much they're based on fiction.

And now for a smidgen of political humor.  Sydney Powell has filed paperwork in her defense against Dominion's lawsuit stating no 'responsible' person would have believed her claims of election fraud. 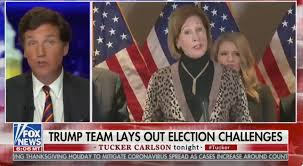