Yesterday was... well...  I believe the last time America and the World sat glued to their TV sets and fervently watching their computer screens, and their smart phones, was on 9/11.  The events which unfolded seemed to have come straight from the warped mind of some 'B' movie scriptwriter: a failed president inciting acts of treason in a desperate attempt to start a revolution.  And he called these traitors to the constitution patriots. He Tweeted praise until his account was shut down.  I suspect this will be permanent since reactivation is contingent with his deleting photos of the insurrection, photos he Tweeted, photos he praised.  For him to do so would be admitting publicly how terribly wrong yesterday was, something he cannot do.  And when he finally asked them to leave the Capital, he continued his lies about the election.

I watched some of the speeches last evening as the Senate and the House gathered again.  I noticed a tremor in McConnell's voice as he spoke.  He knows that yesterday was a bullet in the heart of the GOP.  The party has splintered into disparate factions and not one will survive.  I listened as the hypocritical Lindsey Graham suddenly decided to switch sides.  His political career is over.  Romney stated the obvious, the seditionists will never believe the truth, they have been too deeply indoctrinated by the constant lies.  Schumer and other Democrats placed the blame directly on Trump.  Republicans, except of Graham, danced around his name.  They feared call him out and placing the guilt on his shoulders would associate them with his attempt at tyranny.  They are just as guilty.

Over 100 members of the House and 7 members of the Senate still voice their objections to Biden's win.  There will be no unbinding them from their deceit.  The newspaper in Hawley's, a newly elected instigator from Missouri, has openly blamed him, saying he has blood on his hands.  Media outlets across the country and around the world are publishing the names of those traitors to the Constitution, those Trump insurrectionists by name.  They are now worse then shit on your shoe.

And yesterday was not all horror.  There were winners!  The Democratic Party now controls the Senate! 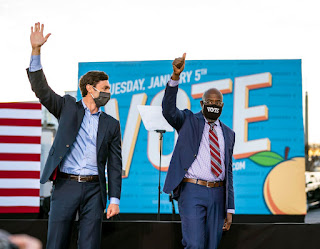