I'm hoping today turns out to be a slow day at work.  Maybe we can have a Sunday like we used to have in previous winters.  I don't mind if the weather is overcast, I'm inside.  Whether it's sunny or not, the dogs are going to be home sleeping, one on the sofa and one on the futon.

Since I bought my running shoes from Amazon, I knew I should be expecting one of their little 'review' emails.  What I wasn't expecting was the product.  The running shoes I bought are evidently 'women's' running shoes.  My selection was made on size  (9 1/2 wide US) and color alone, not gender.  So tell me, do these look like women's running shoes?  If so, what makes them specifically for women? 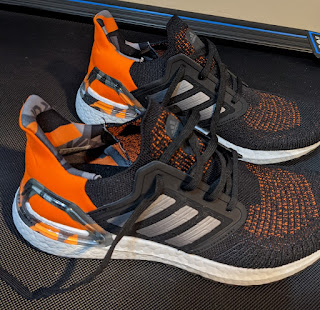 I did file my 2020 taxes yesterday.  Evidently the Fed doesn't accept them until February 12, so I'm no in the queue awaiting my refund.  I use a service called OLT which takes care of my Fed and State returns but not my local taxes so they will have to wait since I find them such a bother.
And I went for a 15 mile ride around Amsterdam yesterday on a route I created with their maps.  Really nice, though my legs were a bit wobbly afterwards.  Oh, and I no longer use the earbuds.  I simply shut the door and turn up the speakers, that too is very nice.
Arizona Republicans censured Cindy McCain yesterday.  She was not alone; two other high level Republicans were also censured because they opposed the Idiot Jerk.  And the Fool in Florida is now talking about starting a 3rd political party.  I am too kind by calling him a Fool, but then neither he nor his base understand January 6.  On that day, a large majority of Americans flushed them down the toilet.  They are now truly the minority party.  This idea is beyond their comprehension.  Over 5000 Republicans in Arizona changed their party identity on January 7, and while numbers disavowing the GOP have slowed down, they are continuing. This is happening in every state.  Son of a Bitch!  Instead of assessing the damage done to their party by the Washington Riot, they are clenching their teeth and buckling down as they screech 'screw you.'  That's right, they're going to bury themselves in their own shit.