So, it was a sleep in morning after 4 days of work.  I also stayed up late last evening, watching "The Prom."  The music was nice.  There were quite a few comments about James Corden playing a gay character and I agree with them.  Don't hire an actor just to get a name on the marquee.  I like Meryl Streep, but again, they should have hired someone younger, but again the marquee won out.  The show may have played well on Broadway, on my large, flat screen TV I thought most of the two hours came across as... well, flat.  Be forewarned, Act II comes across as a Disneyfied sugar rush. 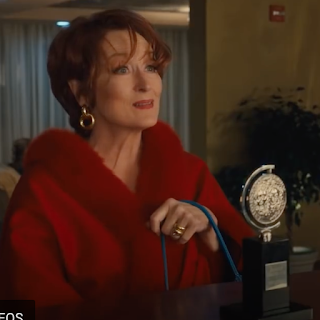 Of course, ever since the Idiot Jerk's failed coup attempt, we've been flooded with images, videos, and statistics.  One of the statistics I find most amusing is the one regarding his approval rating among Republicans, which is around 74%.  At first glance, that % seems rather high but then that first glance is seeing it out of context.  That figure represents his Republican base.  His overall approval rating across the country is 29%.  That is the % represents America, not the GOP.  The 74% of Republicans is, in reality, 29% of Americans.  The GOP is now and will always be a minority group because they are mostly white, and they are just not making enough babies.

Oh, and the funniest thing I heard yesterday was a comment made by Rand Paul, that if the Senate finds the Idiot Jerk guilty, half of the House will walk out.  Sorry, but does he really see that as a threat?