And so the week begins, yeah, that's right, yesterday was my day of rest, well, on and off if you know what I mean.  I washed a couple loads of laundry, and got a 30 minute joggy / runny session in, and even had time to bake a blueberry pie with fresh blueberries.  The lattice looks a bit crappy since I'd never done anything like this before.  The recipe had the oven temp at 375 (F) with a note that said the original temp had been 425 (F) but had been adjusted down.  Well, I must have had too many blueberries because the lower temp didn't give the cornstarch a chance to thicken the sauce.  That's right, it's runny.  Later this morning I'll pour the sauce into a pan and heat it to hot enough temperature for the cornstarch to do its stuff. 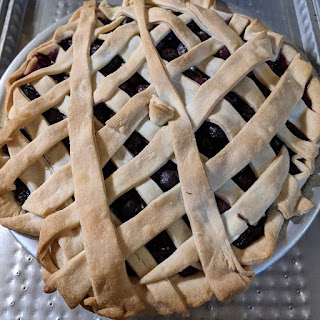 I received a notification from FedEx that my new printer will be arriving on Wednesday.  I was scheduled to work, but will take a personal day since I need to sign for it.
The Idiot Jerk in the White House is expected to issue a flurry of pardons over the next 2 days, including pre-emptive 'get out of jail free' cards to his kids.  Of course, this makes them look horrific, but do you really think they care what you think?  Don't worry, they will be challenged in the courts.
And it seems many of those rioters who have been taken into custody are blaming the Idiot Jerk.  They are claiming his words spurred them on to violence.  What they really want is for him to give them pardons, too.  Remember, he doesn't like losers and, unfortunately for them, they got their asses arrested.  That's right, in his eyes their losers.  Ouch.
And finally, today is Martin Luther King Jr Day.  Notice, I didn't use initials.  To me, mlk sounds like something you might pick up at Dairy Queen.  I like the way the syllables ring out when you say his full name:  Martin Luther King.  Give him the respect he deserves.