Well, I had planned on sleeping in yesterday but the dogs and their bladders would have none of it.  This morning things were different.  After I turned off the alarm at 0530, neither roused themselves.  An hour and half later I climbed out of bed.  Nice.  I do like sleeping in now and then; wouldn't want to make the practice regular.  Now the chores begin.  Right now, I have eggs boiling to make egg salad.  Don't know why, but for some reason I've been eating a lot of egg salad yesterday.

My new color printer arrived yesterday and setup is complete.  Took longer than I thought, probably an hour since I took the time to connect it to the cloud and to my mobile device. That right.  I can now print pictures straight from my phone.  Isn't that nice.  Also, and I found this a bit interesting, it's an Epson, which is owned by Seiko.  For years and years the only watch I wore on my wrist was a  Seiko.

The storm system that moved through yesterday gave us mostly rain, a touch of sleet, and a bit of ice early on.

I saw an interesting article this morning on how Wisconsin's tepid Covid response was the direct result of Republicans' gerrymandering.  Over time, Republicans in that state have gerrymandered district lines in order to maintain control of the the state's legislature.  That is not the case in Pennsylvania, where the State Supreme Court directed a redrawing of voting districts. 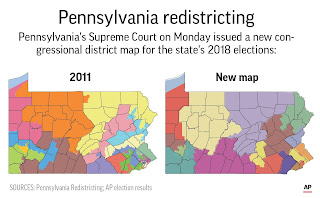 This does not mean, however, that gerrymandering is going to stop for the near future.  Political parties are always going to try and wield as much power as possible.  To do this they need to redraw the lines.  One of the many great things to happen with the recent transfer of power was the hold put on the 2020 census.  This halted the Republicans despicable attempt to limit which people can and which people cannot be counted.  They did not just want to stifle voices, they wanted to eliminate them completely.  This silence they intended to foster was designed specifically for the purpose of enabling them to redraw the lines. The best way to muzzle people is to say they do not exist.  Republicans refuse to understand that America is changing.  In order to stay in power, they would need to redraw the lines more and more frequently, creating a never ending gerrymander.  Their inability to understand this truth is the keystone of their approaching failure.