Well, here we go, once again we are ready to approach that thing some call a weekend.  Small pause while I take my digital temperature...  .... 97.5 (F).  That's a little warm for me, but I've been drinking coffee.

I have a laminate floor sale going through today,  Honestly, I really hate dealing with laminate.  There are so many problems which can pop up, the levelness of your floor tends to be a culprit.  Besides, while I know some of you out there might have it in your homes, I'm not wild about it since I see it as faux wood.  I have real hardwood.  I like hardwood.  With laminate, you have a picture of hardwood on top of a pressed core.  That's why it's less expensive.

Damn, the battery is going in my mouse.  I hate when that happens.  I have a really nice gaming mouse I might switch to so batteries are no longer a problem.  It was used heavily when I was playing games on the PC.  A little dusty from sitting in a drawer for a couple of years, but it should do fine. 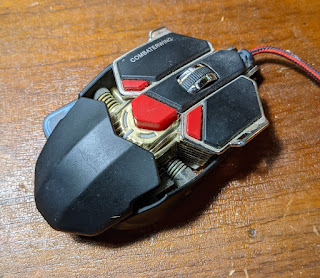 And, of course, the Idiot Jerk was impeached a 2nd time yesterday for inciting his supporters to violence.  Since is Twitter is gone, he's very quiet, which is rather nice.  The word is out McConnell, who had no problem with his supporters until they shit in the halls of Congress, wants him purged from the party.  Like all spineless Republicans, he's going to let that happen after Biden takes office.  Purging the Idiot Jerk means purging his base.   They are already beginning to point fingers at each other.  This is how the GOP splinters.
As time passes, more and more information comes out about Republican Congressmen who may actually aided and abetted the riot.  There seems to have been an increase in Capital Tours in the days prior to the riot, which is odd since they had been restricted because of Covid.  And apparently one Congresswoman Tweeted Pelosi's location.  If that's true, she's going to be arrested for insurrection.  And there are other investigations on the way.  I don't know how many Republicans know this yet, but they're staring down the gun of their own Benghazi, only this is a thousand times worse.