I cannot believe today is Saturday.  Of course, I have to go back to work wishing I had accomplished more yesterday.  This is the problem with not having consecutive days off.  I always look back and ask myself what I did?  How could an entire day pass without my checking off more chores.  Son of a bitch!

I did get a bike ride in yesterday, over 11 miles.  Oh, and I did go to the movies last evening.  Wonder Woman 1984.  I enjoyed it, though I'll admit it wasn't your normal superhero, entertainment fare.  There's a moralistic prelude which runs about 10 minutes, and then a 2 hour and 20 minute moving primer on that moral.  There was an obvious parallel between the villain and our failed president, a man who has no problem sacrificing everything as he grasps for ultimate power.  The resolution was a little weak, but hey... at least we got to see Chris Pine.  Spoiler:  There is no revealing bathtub scene.  There is, however, a very long digital flight through fireworks,.  In fact, there are a number of extended scenes which could have have been cut short. 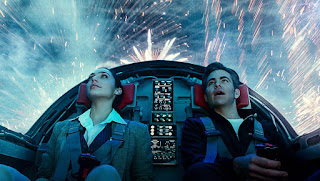 Every now and then a memory will surface, a thought that rattles around inside my head for several days and then something serendipitously happens in the outside world which references that thought.  There was a time when my brain was like a sponge, absorbing shiny, little facts.  Back on Wednesday, as the shitstorm was unfolding in Washington, a facet of memory splintered off and began bouncing around inside my skull.  The Whigs.  For those who don't know American history, the Whigs were a political party that came to a rather unceremoniously ugly end.  However, like a bad virus, they mutated, the end mutation was what we call the Republican Party.  The problem with the Whigs?  They vomited out their principles to make room for their craving for power.  This morning, while I scanning the Washington Post I found an article referencing the similarities between the Republicans and the Whigs.  Interesting, isn't it?

Oh, and Apple is forcing Parler to begin moderating their hate.

Not surprisingly, 30 % of the country, the Republicans, believe the Idiot Jerk did nothing wrong.  This is similar to what happened when Nixon resigned.  They just can't believe the truth.  They are so out of touch with reality they have no idea how much damage he has done to them.  They won't understand that until we vote them out of existence, and then they'll blame us because we shut them up.