For some of you it's normal to sleep in on a Saturday, for me normal is a 0530 wake-up call.  Being a morning person, I don't mind.  Unless I request off, I'm always working on Saturday.  This is the way of Retail.  This is what I told a Navy buddy of mine who's setting up a video meeting this afternoon.  I told him that I'd love to join, but these things need to be scheduled at least 4 weeks out so I can request the day off.

AMC emailed me a survey, I'm a Stubbs ticket holder, which is their free entry level account.  I earn points towards free purchases at the concession stand with every $ I spend.  Filling out the survey earned me 500 points.  There were some interesting questions regarding my concerns of going to the movies in the time of Covid.  One of the odd questions concerned my interest on playing my video games on the big screen.  While that might be interesting, I do think seeing my Eivor on a giant movie screen might be a little overwhelming.

Oh, and snow is in the forecast.  In some places they're forecasting for 6 inches (plus).  Don't you just love that 'plus'?  That's also known as a guestimate.  All we have so far is an advisory, however when I check the map I saw that Harrisburg is just north of the warning zone.  This means they're tracking the storm to move south of us.  Also, this storm is moving slowly, so our accumulation will come from sporadic spurts. 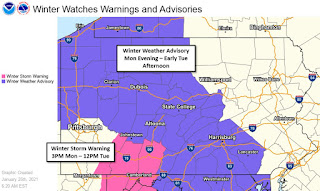 There was a bit on NBC News about the Biden administration beginning to repair the Court system.  During the four years of the Idiot Jerk's term, McConnell shoved through a lot Cracker Jack Crazies bent on thrusting a Conservative agenda down America's throat.  This is an excellent example of their "shut up, we're in charge" approach to dealing with a majority of Americans.  For a change it seems as if the Democrats are moving with extreme haste, mostly because the party in power tends to lose seats in the House and Senate during the first election cycle of a new president.  That statement is true under normal circumstances.  These are not normal times.  The losing party is splintering.  Their failed president wants to start an egocentric party of Cracker Jack Crazy Conspiracy Theorists.  Moderate Republicans who stayed onboard simply because it was the Republican Party are abandoning ship.  They are a party desperately trying to hold onto a minority Lunatic Fringe.  The next voting cycle will be anything but normal, and that terrifies the opposition.