Even though I was scheduled to work in the paint department yesterday, I did end spending most of my time in flooring.  That's fine,  Business has slowed down somewhat, though not to the level where we see occasional customers.  I'm beginning to think this is because so many are now working from home.  When one of my neighbors worked from home, it was not unusual to see her out working in her garden wearing her little headset.  Most people tend to decorate their offices  or cubes, so why not redecorate their house?  The problem with that rationale is that it ignores the fact that home improvement costs can be rather prohibitive.  The simple answer for many is to simply charge it.

Anyway, in case of you haven't noticed both Gamestop and AMC have been turning Wall Street on its head.  These two organizations are not considered serious investments by a small percentage of wealthy investors.  However, many of these investors desperately want to get on board when a company's stock begins to rise.  With these two company's though, heavy investors will end up losing more then they earn since stock prices are fickle, going up and down almost by whimsy.  I do not doubt for a second that these day traders pushing these stocks are giving the 1% ulcers.  Good.

And, speaking of games, I did finally get around to undressing my Viking lad Eivor.  As you can see, he's blonde with a bit of scruffy beard.  Is it any wonder gaming is a multi-billion dollar industry? 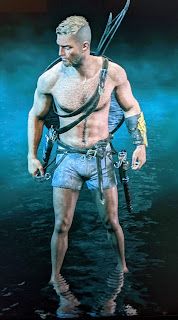 I heard an associate at work yesterday complaining about all the Republicans who were changing their party affiliation.  You know there's some serious concern when your basic, average Republican begins to worry aloud.  Isn't it funny how the party's reaction is to wrap themselves even tighter around their beliefs.  They don't understand these are moderate Republicans who are fed up with the Idiot Jerk and his bullshit.  Some people will never learn.

And for those who think The Body in the Loch is only about murder:

Email ThisBlogThis!Share to TwitterShare to FacebookShare to Pinterest
Labels: AMC, Gamestop, home improvement, Republican, The Body in the Loch, Valhalla