My legs hurt like hell.  It's that damn trainer working too well.  I was working my vastus intermedius really hard... well, for about 6 minutes at least.  That's all it took.  I had such a burn going on.  So, I turned off the trainer.  And I got off the bike.  Tomorrow I will do a less extreme workout since I'm going to need to build up some strength in my legs.  Well, just one specific area of one muscle group.  A lot of people don't realize that your muscles are broken down into subgroups; each quadriceps has 4 different sections.  Walking relies on one section more than any other, running uses multiple sections, and cycling?  Upper thighs mostly.  If you ever look at the legs of a cyclist you'll see they have teeny weeny calves and big thighs.  Now I have to train my upper thighs in order for them to roar like thunder when I ride.
And what about the Idiot Jerk in the White House and his pissing match with the Idiot Jerk in North Korea?  Am I the only one who sees them acting like petulant 12 year olds?  Don't worry, they'll start taunting each other's mothers any second now.  Of course, this is why the Idiot Jerk is... well, the Idiot Jerk.
Also, Melanoma gave some sort of speech.. yesterday, I think.  I don't remember exactly because I was blinded by that neon pink road crew dress she was wearing.  Do you know what I mean?  You do have to give her credit for trying to bring a stylish new wardrobe to Flagger Force.  Gee, they would no longer need to stop traffic with a sign, just stand their with their arms out. 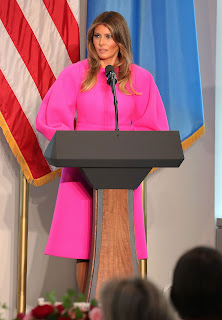 For decades First Ladies set styles, created trends... until now.  All this one seems to be trying to do is  stop traffic.  To be perfectly honest, I think it's inflatable and the Idiot Jerk just pumped in too much hot air.