A little about me

Here's a little about me for those who might be interested.
I'm going to be 65 on November 8 and I am pretty much a Scorpio.
Forty Seven years ago, when it was vastly unpopular, I volunteered.  I joined the Navy, and went to Vietnam... well, the Tonkin Gulf to be more precise.  The countryside was quite clear from the flight deck (I was on an aircraft carrier).  Because of that, I get decent VA medical insurance, being in a war zone, you know?  The only ones who get better insurance are those who retired after 20 years and those who were disabled.  Not bad, eh?
In face, it turns out I've volunteered for a lot of things, doing my Civic duty, you know?  For about 12 years I was a trainer for the Red Cross:  CPR, Basic Life Support.  It was fun.
I also volunteered for what was called "the gay switchboard," which turned out to be very, very boring.  Not a lot of calls back then, mostly from business men in town for a meeting who wanted to know where the bars were.
The Central PA Pride Festival?  I was part of it.  Starting off as a working, I did PR for a couple of years and finally co-chairing the thing with a woman named Tina.  This is me in 1998 wearing my cute little Pride T-Shirt. 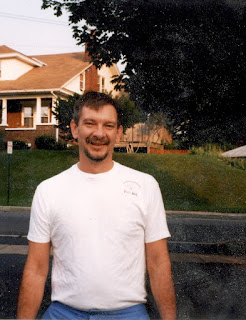 I had a lot of fun... but it also cured me forever of my volunteerism.
A lot of people will volunteer just to say they're part of an organization, which means their reliability is questionable.  Four of us carried the weight on our shoulders, did the grunt work, on a regular basis because of 'no-shows.'  Three weeks after the festival my friend Matt resigned, and two weeks later I handed in my resignation as well.  And I haven't looked back.  They were good years, and for the most part, a lot of fun, but the time had come to step back.
While I've been in a few relationships, none were momentous enough to create moments of nostalgia when I think back.  I am much better by myself than I am trying to fit my life around someone else's.  Blame it on the Scorpio thing.
And since I got the dogs I can honestly say I am happier now than I have ever been.  We are all different.  We are all the same.  And I... am me.
Posted by Dave R at 9:03 AM