Well, Donald Trump was in Harrisburg last evening for a rally.  That's right, he was about 2.5 miles away speaking at what we here in the mid-state call the Farm Show Arena.  Yesterday morning I had breakfast with my brother and he was a little concerned.  His son and daughter in law had sent him a text asking if he wanted to join them in protesting.  We all know sometimes protesters don't fair too well at Trump rallies.  I told them he ought to go, and if he didn't he should at least tell them to have fun.  You know, it's not just everyday you get to protest an idiot like Trump. 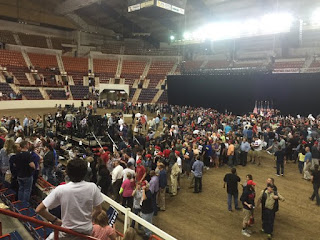 And this morning I was reading some of the comments by those Trumplodites in attendance, and, of course, they loved him.  However, there were some complaining about his security.  It seems as though they didn't let individuals carry their firearms inside, and that upset some of those who feel naked with out a loaded weapon.  In fact, one went so far as to wonder where the NRA was and that organization wasn't fixing this atrocity.
Anyway, they only arrested one protester, and it wasn't either my nephew or his wife.  Evidently local law enforcement knows just how much distance they need to keep between those who know Trump is an asshole, and those who can't wait for him to bend over so they can pucker up.
Posted by Dave R at 2:05 PM