Small minds of the GOP

For years the GOP has been compared to a 3 legged stool because the only way it can function as a political party is by making sure each leg takes up its share of the balancing act.  That stool is wobbly as hell right now.  You see for years the Economic / Fiscal Conservatives were happy just as long as they kept getting tax breaks and loop holes; they didn't care if the part kowtowed to the Social Conservatives just as long as they could keep putting money in the bank.  And the Social Conservatives thought they were the elite consciousness of the party, even though they like to label Liberals as elitists.  And the Foreign Policy Conservatives were happy because they like us to be the World's Police Force, they love to be important.
But then something terrible happened.  They managed to get George W. Bush elected and things started to go to shit; 9/11 proved they weren't keeping the nation safe and sound, and they lied about weapons of mass destruction.  Oh, and the GOP spent money like it was going out of style.  They were also the party in charge when the country suffered the 2nd worst economic disaster in history (and, of course, they blamed Clinton.)  The stool was wobbling back and forth so hard it was a wonder it kept standing. 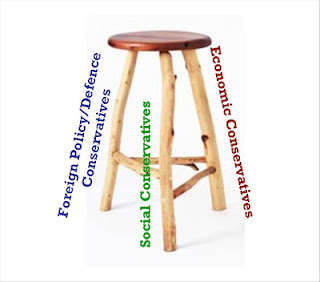 And so the GOP turned towards the only leg they seemed to have left to stand on, the Social Conservatives.  Almost immediately they started claiming they were under attack.  Their flawed line of reasoning being that if you're not doing what they want you to do, then you must be attacking them.  Suddenly, they saying there was a war against Christianity.  However, instead of steadying the stool, they only added more to the wobble.
Now, all three legs are trying to beat the shit out of each other.  The Social Conservatives are promoting their hate by creating laws that discriminate and the Fiscal Conservatives are saying Hell No, we need to make money and your stupid rules are hurting us.  The Foreign Policy Conservatives have stabbed themselves so many times with Benghazi, and email charges, and more blame against Clinton, they're barely standing.  Small minds do terrible things.
If Donald Trump is right, come July, this whole thing is going to be torched.  Ah, well, that's life.