The Devil went down to Georgia

It's a bit chilly willy this morning, with the temp sitting around 28 (F).  There's some form of precipitation heading into the area tomorrow, which is a day off for me.  I'm not anticipating a lot of lawn work being done.

Yesterday was rather slow at work, this is normal.  Slowdown time.  Are installers are evidently booked through Christmas, so anyone trying to impress those friends and relatives foolish enough to visit over the holidays are out of luck... maybe in more ways then one.

Covid is breaking records all over the place... as predicted by the men of science.  Record infections, record hospitalizations, record deaths.  The White House Task Force released a statement saying we were in a dire time.  Okay, can someone tell me who exactly is running the White House Task Force?  Wasn't it supposed to be Mike Pence?  He's been awfully quiet here of late.  He must be sitting in some back room planning his 2024 campaign.  I know both Birx and Fauci have been talking to what Republicans call the Lame Stream media, but I suspect their orbits are too far outside that of the Idiot Jerk in the White House to hold any weight with his crumbling government.

And I guess the Idiot Jerk in the White House released some sort of 46 minute lie-a-thon video yesterday which I'm sure many of his base will cherish.  There's concern about his upcoming visit to Georgia.  Can anybody hear shades of Charlie Daniels?  People are worried it might incite violence.  Do you really think he'd care if people get hurt?  Nope.  Everyone, everything is expendable in his craven need to maintain his grip on power.  You see, in Russia this would work.  Not here.  Americans actually like their Democracy.

Oh, and Ivanka Danka was deposed yesterday.  I wonder how much of the money supposedly spent on the Idiot Jerk's inauguration ended up in her bank account.

And finally, something to brighten your day.  A picture of my Christmas Cactus in full bloom taken this morning with the sunlight shinning brightly through the front window. 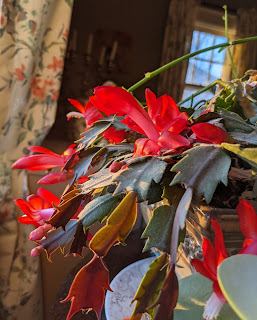