Heading into the New Year

So, we're heading into a New Year.  Four days and counting... 3 if you no longer count today.  For the first time in 4 years, I'm excited.

Yesterday was odd at the store.  Around 2:30 PM, all the customers started to go home.  By 4:30 PM there were like... oh, maybe 8 in the store.  Associates walked, and talked among themselves.  Normally, we see this in January and February.  Don't get me wrong, the people who were there spent a lot of Christmas money.  Maybe, as the Covid cases continue to increase in Central PA, people are beginning to realize this is more than just a serious problem.

One thing I have noticed, the Idiot Jerk's Tweet storms are no longer being given the massive coverage they once were - this is what happens when you're a loser.  That alone must be galling him for here to Hell and... well, I'd say back, but I'm fairly certain he's going to stay in Hell once he gets there.  Yesterday, it seems he did rage a tiny inferno, dwarfed into nearly non-existence by the bombing in Nashville.  I don't know where I saw it, perhaps the AP, but the Idiot Jerk seems to have call the Supreme Court "ignorant and incompetent," and they were not his only target.  Not surprisingly, he didn't sign the relief bill... in case you didn't know, this is his way of saying "fuck you, America."  This turd is getting flushed, even if we have to call Roto-Rooter to get him completely out of our plumbing.

And finally, a long, long time ago I graduated from Lebanon Valley College, a small liberal arts college, with a degree in English Literature.  Lebanon Valley used to be one of the 10 best small liberal arts colleges in the northeast, so I got a fairly decent education.  In my senior year all I did was read and discuss literature in every class.  One of those classes was Women in Literature.  That class stands out simply because of one book that I found so amazing - Virginia Woolf's "Mrs. Dalloway."  This morning an article about "Mrs. Dalloway" in the NYT.  The book is about one day in the life of woman who's going to have a dinner party, and the consciousness of a war veteran named Septimius, whom she never meets while he's alive.  I found the book fascinating. 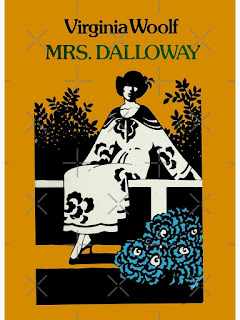