We have rain this morning.  It rained yesterday, and the day before.  It's a little late in the growing season, if you know what I mean.  I have peppers and tomatoes.  My cucumbers?  meh.  I'll probably try cucumbers again next year, however I probably won't put them in a container.  I'll probably just stick them in the ground like most people.

Yesterday I found out that Sunday will be the last day we will enjoy the presence of a certain Specialist.  How many of those days will he actually work?  Don't know.  He is neither popular, nor does he care for those of us he works with.  He desperately needed to be number one, even if it meant lying about it.  He liked telling people his sales made him the Number One Specialist in the store.  It wasn't true.  We have a kitchen designer whose sales beat his hands down.  Still, that didn't stop him from trying to impress customers with his sales tales.  He's a lot like the Idiot Jerk in the White House, a man who has no problem lying to impress.

I see Blogger is now inserting blank lines between paragraphs.

Speaking of the Idiot Jerk... Deutsche Bank is turning over the documentation he provided from back when he filed for some very large loans.  Actually, I do believe they began complying with the subpoenas back in April, 2019.  Of course, this is one of the main reasons why he's lying to get his sorry ass re-elected.  A sitting president can not be taken into custody,  The second Biden is sworn in, however, that protection disappears.  The minute Biden wins, the exodus of evil will commence.  I, for one, would not be surprised if his future includes a Reality Show in Russia:  Who Wants to be an Ex-President.  Maybe they could do something with Ivanka Danka turning over letters... or numbers... or fashioning striped sweats suits as Mealy Mouthed Jared collects cash from the audience.  I don't know about you, but I can see Melanoma making a boatload of cash from a solid stable of hookers models.  Or, maybe the show will be similar to The Osbournes.  They could call it The First Family From Hell.

Let's end this with a parting shot of one of America's phoniest Cracker Jack Christians.  This is how you grow respect. 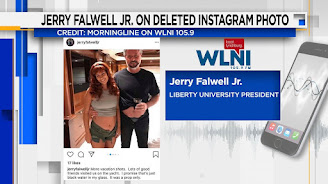