The Gloves Are Off

Since I have today off, and to celebrate the arrival of Jules Laurant at Dun Adair, I stopped off on my way home from work yesterday to pick up a bottle of his favorite beverage: Port.  Tasty stuff.  I actually like it better than Sherry.  Port is very good for sipping. 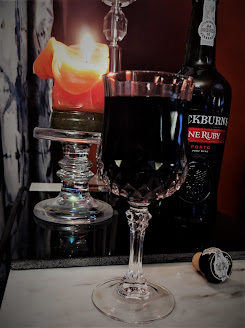 And lots of good stuff is planned for today:  return the broken track lighting, install the new track lighting, go for a ride on the bike.
And did anybody watch the opening night of the convention?  I did.  On my computer.  Since I have a subscription with the NYT, I watched it in its entirety... without commercials.  There was commentary scrolling down the side I could read rather than watch advertising.  I have no idea how the ratings were, though I suspect since the entire event was virtual, many may have turned in just out of curiosity.  One of the commentators noted that normally viewership is between 11 and 15 million.  However, because of the format, you can watch the entire thing in bits and pieces on YouTube. Being a virtual convention, it did not run late... well, I think 5 minutes.  The only thing that didn't work for me were the shots of average Americans applauding in their living room.  This might work for sporting events, but came across as rather surrealistic.  Now I will admit to occasionally standing up while watching the final sprint to the finish line during the Tour de France, I don't usually do that for speeches.
As for the verbal attacks on the Idiot Jerk in the White House?  I found them invigorating.  We all hold a lot of anger towards this man.  It was good to see so many others demonstrating the same emotion.  The Gloves are Off.  The time has come to pummel this administration and the Republican Party until they're senseless...  Oh, hell, that's right... they're already pretty damn witless.