So, I went to see Fantastic Beasts last evening.  As someone who is, for the most part, totally ignorant of the Harry Potter Universe, I sat down in my seat with a little trepidation, only a little, though.  Since it was Tuesday night my ticket only cost $5, and my popcorn and soft drink only came to $4.24, not a bit investment.  Colin Farrell plays the villain... quite well, this former pretty boy is aging rather well.  Eddie Redmayne is the hero and I suspect his genes are not as good as Collin's, but then I'm not an Eddie Redmayne fan.  He is not a ginger for the ages.
Anyway, there's this evil thing killing people in New York and Collin tries to put the blame on Eddie's beasts, and, well the plot is rather standard.  Katherine Waterston and Fine Frenzy (bad stage name?) are very good.  The CGI effects are... spectacular.  This movie looks simply amazing.  But then there's Eddie.  No doubt he's trying.  I mean the guy can act, but he's no Daniel Radcliffe, who, even in his flops is more than just a screen presence. 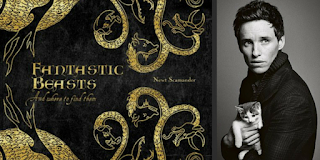 And then, right at the end, that horse's ass Johnny Depp shows up.  Evidently his brief cameo is supposed to be built upon in the next 3 or 4 sequels.  Holy Shit.  And, evidently, his casting is also quite controversial because everybody who is anybody knows Depp is box office poison.  What a terrible shame.  This franchise looked a bit promising.
Posted by Dave R at 7:11 AM