Haven't written anything political lately, so I thought I'd drop in a line or two before I went to work.

There are a number of people out there who are still dumbfounded by the election results.  I've come to terms with them.  Plan ahead.  The Republicans have never been good with the economy, every one, except the rich, always loses money.  So, safeguard your 401k.

Prepare yourself for the spectacle of infighting.  Republicans are no longer united, even though that's not what they want you to think.  I've read that in a closed door session a minion of the incoming president has actually said that "there is no long a Reagan Conservative Party, now it's the Trump Populist Party."  This is going to get messy.

And then there is the 'incoming' president.  My friend Betsy can't even mention his name, she calls him "that man."  Some just leave a blank line.  Me?  I think we should call him DT because over the next couple of years we will be suffering from the DT's  Follow the link if you don't know what they are. 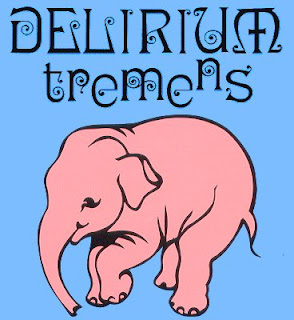 Holy Crap, even their elephant has gone pink... or... they'll probably just call it Salmon.  You can bet your bottom dollar the DT's are going to force their hallucinations into reality.  By doing so they will swerve erratically, and fumble their phony election promises.  All we need to do is grab onto something substantial and hold on tight because we're going to be going watching "It's a Small, Small World" built with drunken auto-animatronics.