The Revenant has no money shot

I went to see The Revenant last night, as did quite a few other people; since it received 12 Oscar nominations the theater was packed.  Described as brutal, I have to say that the beginning was, as was the end... however, the 2 and a half hours in between was a lot of pretentious, artsy fartsy bullshit with lots of problems.
Problem one is time:  The bear attack - it's lush, it's green, there are leafy plants all over the place and ten minutes later it's snowing, and for the rest of the movie there is snow (deep snow) on the ground.
Problem two is location:  At one point a character says that something is about 13 miles away.  Now, I'm going to drop you down in a very snowy landscape without a map and see how close you get.
Problem three is what I call the serendipity of meetings:  In this vast, snowy wilderness, characters seem to be very lucky when it comes to meeting other characters in what are supposed to be random meetings.  They're not.  They're essential for moving this long, long story forward.
Problem four is predictability:  You know what's going to happen, and I'm not just talking about the revenge aspect.  At one point DiCaprio intervenes in another character's story line and you know exactly what's going to happen at the end of the movie.  People get shot and, sadly, you know they're going to get shot before they actually die, other wise the story falls apart. 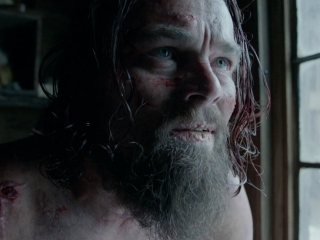 And then there is DiCaprio, bearded and expressionless.  In a lot of his scenes he doesn't talk and, unfortunately, as they used to say back in the 60's, he doesn't emote very well. He has no money shot where he takes you heart and twists it into a knot.  His problem is you don't really care about him as a character, let alone a human being.
I did like Tom Hardy, who's nominated for a supporting Oscar, but is a lead actor in this film.  His running dialogue scenes are the only thing which really made this watchable.
An indicator of what the audience around me thought:  they were leaving their seats before the end credits started.  In fact, as soon as it faded to black, people started getting up. This was a mass exit from the theater, and in the long walk to the lobby I didn't hear one word of praise.  I did hear people saying "it was too long," or variations of those 4 words.  No one talked about the violence, the brutality, or the panoramic vistas because not one of those things gave the audience what they paid for: the money shot that makes it all worthwhile.