The unanimous dis-satisfaction with Unity

Back on Tuesday, Ubisoft, a French game developer, released Assassin's Creed - Unity.  I've enjoyed the Assassin's Creed franchise and was looking forward to this installment.  Previous games have dealt with the American Revolution and Pirates in the Caribbean.  This one deals with the French Revolution and centers on Paris and Versailles.  The trailers were amazing so I pre-ordered it for PC.
I started the download on early on Tuesday morning (yes, it was one of those work days) knowing it would be finished when I got home.  Of course I already read about all of the troubles that came with the release, but I was still hopeful my game would be playable.

This was not the case.  When I went to verify the game I discovered that some of the files had failed to download, which meant more time fixing the download.  And then, of course, when I did finally start to play the game there were more problems.  The screen was teeny, weeny, and neither my game controller nor the keyboard with that did that wonderful mouse I just got, the which fits so nicely in my hand, worked.  I could pause the game, but I couldn't get to any menus.  In fact I need to use the Task Manager just to stop the game.  I tried rebooting the game and rebooting the laptop and each time needed to use the Task Manager.  So I deleted the game and downloaded it a second time, which is time consuming since it's over 41 thousand MB.  And this is what a got: 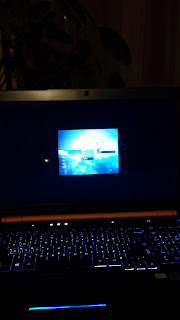 Yep, that's my laptop.  Nice keyboard, eh?  And that teeny, weeny screen in the center is the game.  When it's that size this game looks damn good.  However, now I have a menu which allows me  to change the size of the game - I got rid of the black boarders and it fills the screen.  And it doesn't look as good.  Now I can see all of the issues people were complaining about.  Faces disappear, you try and climb a scaffold and your in the scaffold, or you turn and you're in a wall.  On occasion, Parisians float horizontally down the street.   Things that are crisp and sharp when it's teeny weeny are flawed - hair sometimes looks like it was drawn by a 4 year-old.

Because there were so many complaints, Ubisoft's stock took a big hit.  The lesson to be learned is you don't release a game that's not polished.  If you have to spend money putting out patches to fix problems, then the game should have been delayed.  The only unity in Unity seems to be complete dis-satisfaction.
Posted by Dave R at 2:48 PM